The Infected Tortoise is an enemy that appears in Serious Sam's Bogus Detour.

Infected Tortoises were once ordinary tortoises that have been exposed to the radioactive ooze that the Orcs used on themselves. As the tortoises became mutated, this caused them to grow exceptionally large, develop spikes on their shell and a very strong bite.

Infected Tortoises are hunted by Orcs, where they trap and contain them in large metal cages and taken to factories. There, they are butchered for their meat and fed to the Fattie Swallower.

An Infected Tortoise firing spines at the player. 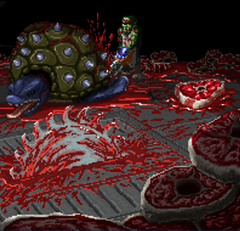 Concept art of Infected Tortoises being slaughtered by Orc Butchers.
Add a photo to this gallery

Retrieved from "https://serioussam.fandom.com/wiki/Infected_Tortoise?oldid=53309"
Community content is available under CC-BY-SA unless otherwise noted.