The Infected Fish is an enemy that appears in Serious Sam's Bogus Detour.

Infected Fish were once a species of ordinary fish (possibly carps or hippotangs) that have been exposed to and mutated by the ooze that the Orcs poured on themselves. As they mutated, they grew arms and legs which enable them to move on land as well as swim in water.

Infected Fish are common around beaches and areas with open water, where they will often attack Crabs or other enemies. They do not appear in the Moon base levels.

As Infected Fish are mutated, they will attack anything that is non-mutated, such as Mental's troops as well as the player. There are two types of Infected Fish; melee and ranged. The melee Infected Fish will stab the target which deals relatively low damage, while the ranged Infected Fish throws spears that deals a bit more damage. 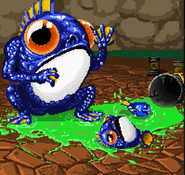 Concept art of fish being mutated by the ooze.
Add a photo to this gallery

Retrieved from "https://serioussam.fandom.com/wiki/Infected_Fish?oldid=53414"
Community content is available under CC-BY-SA unless otherwise noted.