"Do not touch it! This artifact was placed in the Ark to shield the world from its evil!"
―Father Mikhail warning Sam not to touch the grail.[src]

The Holy Grail is a shared name for two important artifacts featured in Serious Sam: The Second Encounter and Serious Sam 4.

The Holy Grail is depicted as a legendary treasure in Arthurian legend, though none of this is mentioned in the Serious Sam series. They both share a very important purpose in the series, and are seen as the main objective in both The Second Encounter and Serious Sam 4.

The Grail has a number of unusual abilities, depending on how it is used. Due to the nature of the Grail, it is highly probable that it is extraterrestrial in origin, and was likely made by the Sirians.

In Serious Sam: The Second Encounter, the Grail's only known purpose is for activating (or powering up) the Sirian backup spaceship in the Church of Sacred Blood. The Arc-Al-Magi, a clan of wizards, were tasked with protecting the Grail from anyone who wanted to steal it. They made a book called the Book of Wisdom, which would show the reader where to find it.

In Serious Sam 4, the Grail is not an ancient alien artifact that looks nothing like a grail, but instead resembling a golden scepter with the figure of a snake curled around it, which is likely to be Aaron's rod. At the time, it was believed that the Grail had the power to heal all wounds, though it's revealed to have a far more sinister purpose. If someone was to hold the rod, the snake wrapped around the staff would come to life and bite the wielder. If the snake was destroyed before it could bite the wielder, the artifact would become extremely unstable. After a while, the artifact would blow up in a powerful explosion.

When someone was bitten by the snake, a bolt of blue lightning would appear and the user would transform into a humanoid abomination. This process appeared to be very painful, as shown when Brand allowed himself to be bitten by the snake. The transformation only took a few seconds, and after being bitten, the wielder would grow to immense proportions, as well as gain immense muscular mass and strength. Their voice would also turn deeper and more monstrous-like. It is not known if this transformation was temporary or permanent.

Aside from being able to transform its host, the rod also had other properties; anyone who had touched the rod was able to pick it up from a distance by reaching their arm out to it, as demonstrated by both Brand and Sam. The wielder did not have to be transformed to be able to pick the rod up. The rod could also be used as a weapon, being able to impale the target like a spear and create a shockwave that was able to incapacitate, but not kill, anyone in a small radius around the user. Brand did this to knock Sam and his friends unconscious when they tried to stop him.

The Grail is Sam's main objective in The Second Encounter. Having crashed the SSS Centerprice into Sierra Madre de Chiapas after something collides with it, NETRICSA tells him that the Sirians hid a second backup spaceship in case something happened to the SSS Centerprice. The Sirians placed Time-Locks in different time periods with several human civilizations so that someone could get to the time period that the Holy Grail was in.

Originally, the Grail was kept inside an ice castle located near the Arc-Al-Magi's hideout. However, Mental found out about the Grail and its importance to Sam's mission, so he wiped out the wizards and stole the Grail from the ice castle. Sam soon found out that Mental had placed it within The Grand Cathedral and had Mordekai the Summoner guard it. However, as Mental and his forces were seen as evil and not within God's mercy, they were forbidden from using the Grail's powers.

With the defeat of Mordekai, Sam enters the cathedral and obtains the Grail. Suddenly, he hears a phone ringing in a confession booth. Inside, he answers it and confesses his 'sins' to Mental for killing his army and then threatens that he is going to finish Mental off. After the call, Sam uses the Grail to activate the backup spaceship, and he departs to Sirius.

Just like in The Second Encounter, the Grail is seen as an item of grave importance. In the very beginning of the game, Sam is in a convoy heading into Rome sent to escort Father Mikhail, as he knows the way to get into the Vatican. According to the Alien Artifact Acquisition, the Grail is located in the Vatican inside the Ark of the Covenant.

When Sam gets to the Vatican, it turns out the Grail was not located in there, but an old Slavic text reveals its actual location is in Carcassonne in France. With this information, the team board a plane to France. On the way there, Mikhail warns the team that the Grail is an "anathema unto God" and is a cursed object. He explains in further detail that men had died trying to shield it, so it was best that the Grail remained hidden. When the time arrive in Carcassonne, they get to the church. There, Mikhail performs a ritual that activates a mechanism, revealing the Ark of the Covenant. Sam opens the Ark and is baffled to find that the Grail is just a stick. Sam tries to grab the stick, despite being warned not to. Suddenly, Brand appears with several of his soldiers. Sam realizes that he has been betrayed by his own superior officer. Brand orders his team to stand down, and deems that humanity should have joined up with Mental when they had the chance instead of fighting him.

Brand grabs the Grail, allowing the snake on the rod bites him, turning him into a monster. Mikhail and Sam try to stop him, but Brand ends up killing Mikhail with the Grail and knocks Sam and the rest of his team out. He then declares that the Grail will be offered to Mental as a gift and he will become "the last human". Brand is later seen using the Grail during the later stages of the Tunguska Offensive, leading Mental's forces through the portal. Sam encounters Brand again, who captures Sam and delivers him to Ugh-Zan VI. He offers both Sam and the Grail to him, but the alien rejects him and Brand turns back into his human form. Sam and his team fight Ugh-Zan VI, before Sam realizes that he can use the Grail to finish Ugh-Zan off. He grabs the rod, and as the snake is about to bite him, he destroys its head, which causes an unstable reaction within the rod. He finally uses the Grail to destroy Ugh-Zan for good. 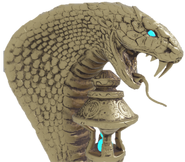 Close-up view of the snake figure.

The Grail inside the Ark of the Covenant.