The Highlander is a massive species of Aludran Reptiloid and so far the largest encountered in the series (Highlander's Bride are larger, however). They are members of a primitive reptilian race from the Aludran System of the Canis Major constellation. Their race was discovered by Mental, who gave them magical powers in exchange for them to join his army. The spells granted to them by the latter are more superior and powerful than those cast by Common Aludran Reptiloids.

Whenever they appear, Highlanders usually spawn away from the player and start walking towards them while constantly shooting fireballs. A few of them also appear in secrets in both Serious Sam: The First Encounter and Serious Sam: The Second Encounter.

In the Bright Island campaign for Serious Sam Classics: Revolution, the Highlander is still rare but slightly more common, appearing from Ruins of the Abyss onwards after the player has killed the Dominant Bio-mechanoid. There are three Highlanders in just Tropical Bluffs, two of which appear at the end to support the Highlander's Bride that appears as the final enemy.

Highlanders are much more dangerous than Common Aludran Reptiloids. They have more health, which grants them high endurace to most weaponry, and their fireballs deal more damage. Another trait that makes them dangerous is that they enter an enraged state when damaged below a specific amount of health, causing them to shoot 6 fireballs per burst instead of 3. They are also very fast for their size, and can easily catch up with the player, even if they spawn far away.

The Highlander's fireballs have weak homing abilities, but will explode when impacting with a surface or wall, unlike the common Reptiloid's energy balls. Their punch, dealing at least 80 points of damage, is incredibly deadly and can either instantly kill or severely wound the player on higher difficulties. In The First Encounter and Revolution, the Highlander's fireballs have the same characteristics as that of the common Reptiloid's fireballs — they won't bolt straight at the player but will travel in a slow, spinning trajectory and can take sharper turns. This can actually make them difficult to destroy and/or dodge due to their sheer numbers, especially when the Highlander's health is low. They can, however, also be shot down by any weapon, just like those fired by the Common's. In The Second Encounter, the Highlander shoots lava balls which travel at an incredibly high speed and follow an arced trajectory straight at the player, exploding upon impact with either the player, the ground, or a hard surface, such as a wall. Like the lava balls cast by the Fiendian Reptiloid Demon, they can only be destroyed with explosive weapons or the XL2 Lasergun. 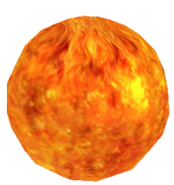 Fireball tossed by the Highlander. 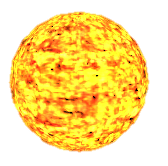 HD fireball tossed by the Highlander.