Laser (100)
The Heliopora is an enemy that appears in Serious Sam: Tormental.

The Heliopora is a species of large cephalopod that has been outfitted with laser technology, activating upon any large impact with a very brief charging period. Only the force created by these creatures hopping is enough to trigger these lasers, so the player can whack them away with the Sledgehammer without having to worry about being hit by the lasers.

The Heliopora only appears in Sea of Thoughts. An elite variant of the Heliopora exists once the player completes a loop for the first time. The elite Heliopora is slightly larger than the regular variant and has a red outline surrounding its body.

The Heliopora's only attack is to fire lasers from the four holes on its body. These beams can deal a large amount of damage. There is a brief charging period before they are fired. The elite variant fires larger lasers that deal more damage, making them even more dangerous. 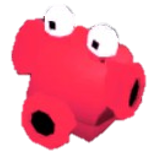 Elite Heliopora.
Add a photo to this gallery

Retrieved from "https://serioussam.fandom.com/wiki/Heliopora?oldid=61360"
Community content is available under CC-BY-SA unless otherwise noted.