Admir Elezović (except for IHRB)
The Hatchling Antaresian Spider is an enemy that first makes an appearance in Serious Sam 3: BFE, and later appearing in Serious Sam 3 VR: BFE, Serious Sam VR: The Last Hope, and I Hate Running Backwards.

Hatchling Antaresian Spiders are newborn Antaresian Spiders, a species of arachnid-like aliens originating from Antares Prime, a planet that orbits a red supergiant. The planet's organisms have evolved to become very large due to the immensive size of the star.

Hatchlings are relatively common throughout most of the game, though they not as common as Juveniles. They can also be found in cocoons. They are very sensitive to noise, and can detect sounds up to 89.5 dB. Thus, if a firearm is shot within the vicinity of a cocoon, it alerts other spiders in the area, causing other cocoons to hatch, which in turn spawns more Hatchlings. They first appear in Into the Spider's Nest, and then in small to medium packs later in the game. They don't appear in The Guardian of Time, instead being replaced by large hordes of Juveniles.

They are common enemies in this installment, and are often seen in small to medium-sized swarms.

Hatchling Spiders are very common enemies in this game, appearing as early as the A King's Tail environment.

Hatchlings are much weaker and smaller in comparison to Juvenile Antaresian Spiders. As they are very young and still developing, they have weak jaws and undeveloped exoskeletons, so if the player is close to a spider, pressing the Use button (E by default) will make Sam squash the spider with his foot, killing it instantly. An individual Hatchling is not dangerous, though a swarm can be deadly if they are not eliminated quickly.

Like other arachnids, Hatchlings have adhesive surfaces on their feet, which gives them the ability to climb walls and latch onto ceilings. Its primary attacks are to fire acid balls at the target, which are produced by poisonous glands in their tail, and to bite the player should they get too close to them. On Serious difficulty in Serious Sam Fusion, Hatchlings can fire green acid balls that bounce off walls and ceilings.

The Hatchling spider's behavior has been altered in I Hate Running Backwards; they don't fire acid balls at the player from a distance, and their AI is limited to only chasing the player and damaging them with a melee attack. 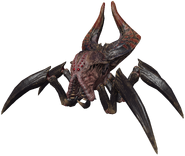 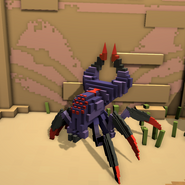 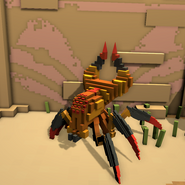 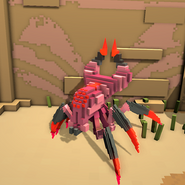