After the destruction of Earth (SS3 & SS3VR:BFE)

The Great Pyramid of Giza, or the Giza Pyramid, was the largest of the three pyramids in the Giza pyramid complex. It plays a critical role in summoning the SSS Centerprice and activation of the Time-Lock.

One of the Seven Wonders of the Ancient World, the Great Pyramid was the only one to remain mostly intact. The pyramid was originally built as a tomb for the Egyptian Pharaoh Khufu, but it also served an important purpose for the Sirians, where they built a secret chamber deep within the pyramid. In this chamber, there was a large hologram displaying Karnak and Luxor; the locations of the two plasma generators for powering up the Time-Lock.

In Serious Sam: The First Encounter, the pyramid is the location where the SSS Centerprice lands once it has received a signal from the rising obelisk in Luxor. For someone to board the ship, they would need to have the Shrine of Amon-Ra in their possession and place it on a pedestal inside.

The top of the pyramid consisted of four large mechanical doors, which were activated from inside the pyramid's secret chamber. The main entrance to the pyramid could be accessed through Robbers' Tunnel, which was dug by workmen employed by Caliph al-Ma'mun around 820 AD.

Approximately four to five thousand years ago, the Sirians sent out a scouting party to Earth, where they first encountered humans in Ancient Egypt. The Egyptians were astounded by the Sirians' superior technology, and worshiped them as gods. During this time, the Sirians had the Egyptians build the Great Pyramid along with other large construction projects throughout Egypt. Meanwhile, the Sirians began creating powerful generators and other machines underground for their own purposes.

Sometime after the fall of the Sirians, the last one, called the Oracle, was laid to rest in a secret tomb within the pyramid, with 'the Arrow' in his possession.

Several millennia later, the pyramid would serve yet another great purpose: activating the Time-Lock.

Deep inside the Great Pyramid was a large Sirian war room, which featured the same alien-shaped statues as the ones in the generator rooms and on the Time-Lock itself. In the middle of the room was a holographic display of Karnak and Luxor, which showed the location of the two plasma generators.

This room was the resting place of the Oracle, where he had been laid to rest on a golden throne surrounded by four statues, with the 'Arrow' bracelet in his possession. Outside the entrance to this room were hieroglyhs which depicted the Sirian bracelet, stating that, upon the Oracle's request, have the bracelet returned to the shrine and rest in peace with the Oracle's ancestors.

In Serious Sam: The First Encounter, Sam ends up in the Temple of Hatshepsut and starts his journey to find the elements, which are the four keys to Karnak, and houses the only way to bring the SSS Centerprice to Earth. After collecting the elements, Sam enters Memphis and collects the Sign of Amon-Ra, which is vital to summoning the SSS Centerprice. He then travels to Karnak and enters it by placing the elements he had collected earlier in various slots.

With the SSS Centerprice finally coming to Egypt, Sam hurries to the Great Pyramid, which is where the SSS Centerprice will arrive at. However, one of Mental's most trusted admirals, Ugh-Zan III, appears and attempts to kill Sam while he is running to the Great Pyramid. Because Ugh-Zan III can regenerate his health, the only option for Sam is to run. Sam manages to enter the pyramid after a close encounter with Ugh-Zan III. After preparing the ship for boarding by using the Amon-Ra item, the top of the pyramid begins to open up, revealing a large arena where Sam confronts Ugh-Zan once again.

To be able to defeat this giant, Sam has to jump through four hoops which are scattered throughout the arena. Once he activates all four hoops, Sam gets Ugh-Zan to stand in the middle of the area, and the Centerprice uses its laser beam on Ugh-Zan, wounding him greatly and leaving him unable to regenerate. With Ugh-Zan weakened, Sam finishes him off and boards himself onto the spaceship, where he departs to the planet Sirius.

The Great Pyramid plays a much larger role in Serious Sam 3: BFE. It also appears to have survived and been spared from destruction during Mental's invasion of Earth.

Sam uploads the data from professor Stein's cell phone back to the Earth Defense Force's headquarters and is contacted by Quinn, who tells him that there is a Sirian chamber inside the Great Pyramid, and for him to make his way there. Once he makes it out of Cairo after defeats the warship, she tells him that the scientists have found a second larger chamber underneath the pyramid, but is unable to find out how Sam can enter it. She also tells him that back at HQ, they are attempting to decipher a riddle that Stein found that relates to opening up the Sphinx. Sam, disinterested, then disconnects and fights through the slum to reach the ruins near the Great Pyramid.

Eventually, Sams makes it to the Sphinx. He contacts HQ and asks Quinn if they've made any progress as to how to enter the Sphinx. She says they're still working on it, so Sam tells her that its time for "plan B," which involves blowing up the priceless artifact. He contacts HQ again to check if they've solved the riddle one more time, which they haven't. Running out of patience, Sam detonates the C-4, causing the statue to crumble and revealing a secret entrance to the pyramid.

Sam enters through the hole, and manages to avoid being killed by the traps. He then makes his way through a long hallway. Halfway through, he comments how it's very quiet and 'creepy' that Mental's forces have not made any attempts to kill him in such a short space of time. At the end of the corridor, Sam comes across a room that has a metallic hallway at the end. Unable to open the door, Sam looks around to see if there's a way to gain access to it. Hidden in the main room is a tomb dedicated to the Oracle, a Sirian who was worshipped as a pharoah by the ancient Egyptians.

Further inspecting the alien mummy, Sam discovers that there is a strange device on its left wrist. Sam picks up the device on to see what it does. He walks back to the door, and, after testing his newly acquired device on the door, is able to open it. Past the door is an elevator that leads to a gigantic room with a hologram of Karnak and Luxor on it. Sam, astonished, contacts HQ and uploads some pictures of it, along with uploading data in the map. HQ then tells Sam that he should leave the pyramid because there's a helicopter arranged to get him out. After leaving the pyramid and fighting some more enemies, Hellfire arrives to pick Sam up. She then takes Sam to Karnak to begin his quest in activating the generators.

The pyramid, along with everything else on Earth, was destroyed by the Moon after Mental sent it hurtling towards the planet.

The Great Pyramid in Serious Sam: The First Encounter.

Sam placing the shrine of Amon-Ra into the pedestal, activating the ship's teleport beam.

Temple near the entrance to the Giza pyramid complex.

Entrance to the Giza pyramid complex.

The Oracle in his resting place.

Hallway leading to the secret chamber. 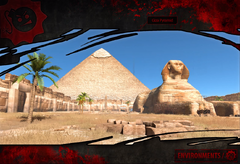 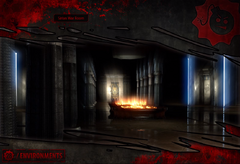 Artwork of the Sirian war room within the pyramid.
Add a photo to this gallery

Retrieved from "https://serioussam.fandom.com/wiki/Great_Pyramid_of_Giza?oldid=53275"
Community content is available under CC-BY-SA unless otherwise noted.