"You ought to be more careful, you'll put an eye out!"
―Sam after ripping out a Gnaar's eyeball.[src]

The Gnaar is a bipedal omnivorous mammal from the planet Sirius. Gnaars are not very intelligent or organized, but were trained by Mental to attack opposing forces. They are very common creatures in Mental's army, often serving as close-range assault or as fodder and to give ranged troops the advantage in combat.

Since their debut in Serious Sam: The First Encounter, they have appeared in almost every Serious Sam title except for Serious Sam Advance.

Native to the planet Sirius, the Gnaar's origins are not well known; they could be the result of genetic experimentation or mutation from ingested toxic waste from the deep sewers of Sky City. Or maybe they quietly arrived from distant space on some cargo ships, made their way through quarantine and settled down in the sewers. When Mental took possession of Sky City, he found Gnaars in huge numbers very close to his residence, so Mental took the Gnaars into his army.

Gnaars are somewhat humanoid in appearance, but with many differences, such as the center of the Gnaar's body, which consists of a large mouth with several crooked rows of sharp teeth. Just above the mouth is a single large eye without eyelids. The large eye catches even subtle light, which allows Gnaars to see perfectly in the dark. Like humanoids, Gnaars have two arms and two legs, but they have neither head nor palms. Gnaars can walk either on two legs or use their arms as another set of legs, enabling them to walk on all fours. There are two types of Gnaars, male and female; females are larger and stronger than the males and are a more greyish-brown color; males are smaller and much weaker in comparison. Both genders have a single large eye in the center of their body, just above the large gaping mouth.

When it comes to movement, the males prefer to walk on two legs, while the females can run on two legs or on all fours. When running on all fours, a Gnaar runs in a manner similar to a chimpanzee. Gnaars are fast and are capable of catching up with an adult human, but a human can easily outrun them by sprinting. The males are faster than the females. Male and female Gnaars can be told apart from their size and coloring; males are purple-skinned and smaller in size than the less common females, whose skin is green. The females are also larger, tougher, and more aggressive than the males. Gnaars usually walk around on two legs, though sometimes they run towards the target on all four in a similar manner to a chimpanzee.

In most games, Gnaars are usually the first enemy the player encounters, and often appear on the first level of every game they are in.

In Serious Sam: The First Encounter, Gnaars are common enemies, with males appearing more frequently in the early levels than females. Nearly-invisible Gnaars and levitating occur quite frequently as well. In Serious Sam: The Second Encounter, females appear more often, though males are very rare, only appearing in the Tower of Babel, along with levitating Gnaars. Nearly-invisible Gnaars are completely absent in The Second Encounter, though they do appear on Serious difficulty. Their final appearance is in The Grand Cathedral.

In Serious Sam: Double D and Serious Sam: Double D: XXL, Gnaars are common enemies, first appearing in In Egyptian Assault either after the player picks up the secret Extra Large Health in the start of the level or after getting the first 12 Gauge Shotgun. Armored Gnaars are much rarer than normal variants, first appearing in Amber Chambers, though they appear in Egyptian Assault as well when playing the game on Serious difficulty.

In Serious Sam 3: BFE and Serious Sam 3 VR: BFE, Gnaars are seen in the first level of the game. Sam first encounters one on a rooftop of a building after falling out of his helicopter, and proceeds to rip its eye out. Throughout the level, more Gnaars appear, either as individuals or in small groups. Later on during the campaign, Gnaars appear more frequently, where they are usually accompanied by tougher enemies, though they are absent in The Guardian of Time, the final level of the game, and instead are replaced by stronger forces like Kleer Skeletons and Juvenile Antaresian Spiders. In the Serious Sam Fusion version of the game, Gnaars have less health at 75 HP but make up for this with the ability to perform a supercharged punch that deals more damage and a lot more knockback than their normal attacks if Serious difficulty is selected. This new attack is signified by the Gnaar's fist glowing as it prepares to hit the player.

In Serious Sam: The Greek Encounter, Gnaars often appear with other weak enemies, such as Kleers and Slugs.

In Serious Sam's Bogus Detour, Gnaars are very common and first appear in Knee Deep in Sand. They usually appear in small to medium-sized groups in the early levels, then in bigger hordes in later levels, with many of them being spawned by Interstellar Tele-Destinations. Elite Gnaars don't appear in any official levels, though they can be used in custom maps.

In Serious Sam: Tormental, Gnaars are fairly rare enemies, and only in Mental Woods in the Mental totem rooms. A baby variant of the Gnaar, called the Gnaaw, appears in the Egypt level.

In Serious Sam 4, Gnaars are very common and appear on almost every level in the game. Similar to The First Encounter, males occur much more frequently than the females, and can be seen in medium to large groups. Females often appear one at a time or in small groups.

In Serious Sam: Siberian Mayhem, Gnaars first appear in A Smell Of Petroleum Prevails, and appear in all other levels of the game, often appearing in groups.

Gnaars are not equipped with any weaponry, unlike most creatures seen in Mental's army. Instead, they rely on the sheer physical force of their strong, clawed hands to attack their opponents. This attack is slow, easy to avoid, and deals very low damage, though it is powerful enough to break through brick walls. Due to their low health, a Gnaar can be easily dispached with the the use of firearms such as a shotgun or assault rifle. Another efficient way to defeat a Gnaar is by ripping its single eye out of its socket, which will instantly kill the creature.

Due to their short digestive tract, Gnaars are always hungry and never stop looking for food. Because of their low intelligence, obtaining food and placing it in their wide mouth is generally the only action that Gnaars can focus their attention on. Their hands are not equipped for anything other than pushing food down the throat. Being omnivores, Gnaars will devour any organic content they can get to, including rotten garbage and corpses, which causes their mouths to smell an unpleasant odor. Their mouths are useless as a weapon, unless they are the floating variety. Despite always being hungry, Gnaars have been trained so as not to try to eat anyone else in Mental's army.

As Mental has tampered with the genetic code of Gnaars, this has granted some Gnaars the ability to retract their limbs and float around, using bites to attack instead of punches. In rare cases, Gnaars can turn almost invisible. If a Gnaar has taken sufficient damage, they will flinch for a moment before continuing to pursue the player aferwards.

In I Hate Running Backwards, while regular Gnaars and their tier 1 variants use melee attacks, the tier 2 Gnaar has a chance to spawn with a rocket on its back. These Gnaars will fly in a straight line at the player from the bottom of the screen. They are relatively easy to avoid, provided that the player strafes in the opposite direction before the rocket Gnaar hits.

Little is known about Gnaar culture, as they are mostly seen as wild animals or primitive creatures. They are not very intelligent either, but they are sapient, and a few individual Gnaars have been known to speak, even in English. The first instance of this is George B. Gnaar in Serious Sam 2, who works as a news presenter. The second time a Gnaar speaks is in Serious Sam 3: BFE. The Gnaar that speaks in this installment speaks in a form of inaudible language. She tells Sam that Tah-Um (Mental) is going to "moon" him before Sam cuts her off.

Concept art for the Alpha Gnaar. 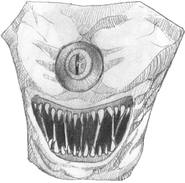 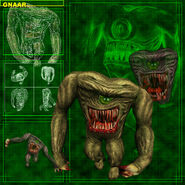 Render of a male Gnaar with a shining eye. 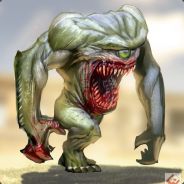 A Gnaar on the box cover of Serious Sam 3: BFE 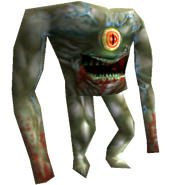 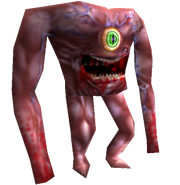 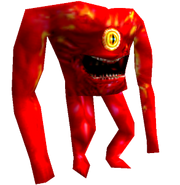 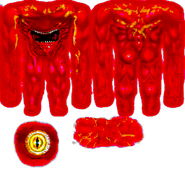 Beta model which had only 1 "finger". 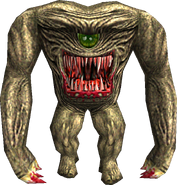 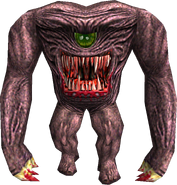 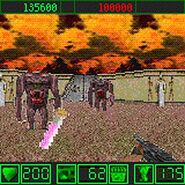 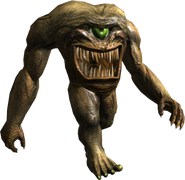 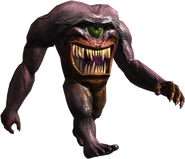 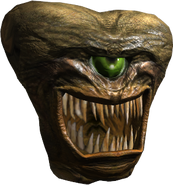 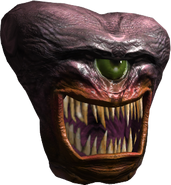 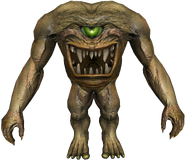 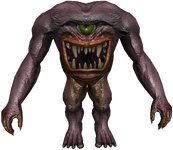 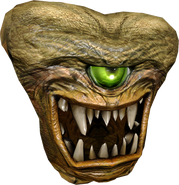 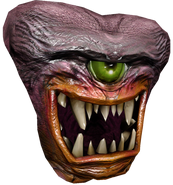 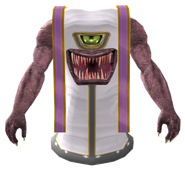 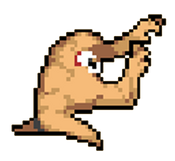 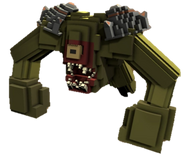 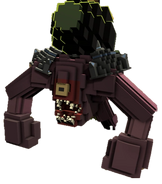 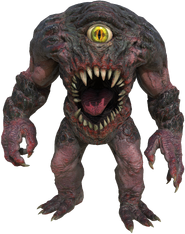 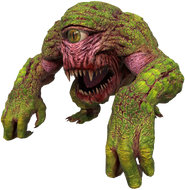