The Flying Kleer is an enemy that appears in Serious Sam 2.

The Flying Kleer is essentially a winged Kleer Skeleton armed with a blunderbuss.

Flying Kleers are not very common enemies, though they are encountered in somewhat large numbers on the Kleer planet.

When a Flying Kleer spots the player, it fires a large fireball from the blunderbuss. Unlike most enemies that will engage the player in combat, the Flying Kleer usually stays away from the player. 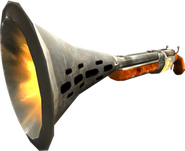 Blunderbuss model, which is actually a modified Double Shotgun.
Add a photo to this gallery

Retrieved from "https://serioussam.fandom.com/wiki/Flying_Kleer?oldid=52714"
Community content is available under CC-BY-SA unless otherwise noted.