The Fishman is an enemy cut from Serious Sam: The First Encounter. It appears as a functioning enemy in Serious Sam Classics: Revolution and the upcoming Serious Sam Origins.

The Fishman appears to have been a bipedal, fish-like enemy that wielded a spear. It could also throw projectiles at the player. The player was able to fight it in water and on land. According to Roman Riberic, the Fishman was supposed to steal the player's ammo and armor, but no mention of this can be found in the code.

It was to appear on the Water Planet levels. 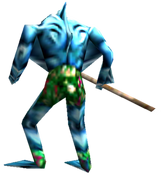 Later version of the Fishman.

Projectile model used by the Fishman and Mantaman.
Add a photo to this gallery

Retrieved from "https://serioussam.fandom.com/wiki/Fishman?oldid=50575"
Community content is available under CC-BY-SA unless otherwise noted.