"Come on Sam, you know I'm more of a minigun girl."
―Hellfire flirting with Sam.[src]

Hellfire was born on the Galileo Station or orbiting Io, one of the moons of Jupiter. Prior to the Mental War, Hellfire worked as a pilot in the Oort Cloud mining sector. She was described as "a real pain in the ass" by her employers, largely because of her involvement with the Commercial Space Pilots’ Union, she was nevertheless in constant demand due to her superlative flying skills. She joined the EDF after witnessing the Epsilon Eridani Massacre while visiting her family in that system.

Hellfire is first introduced as she extracts Sam from the Great Pyramid after he finds the secret chamber. She takes him to Karnak so that he can start activating the plasma generators for the Time-Lock. On the way, Sam and Hellfire start flirting, suggesting that there is a thing between them. When she drops Sam off at Karnak, she tells him to be careful before flying off back to headquarters.

Later on, after Sam succeeds in contacting HQ again, but is answered by Hellfire instead. She is relieved to hear that he is alive. Hearing signs of a struggle, Sam askes her what's happening over there. She tells him that their base has come under attack by Mental's forces, and Quinn has been killed, while Charlie Team are nowhere to be found. She goes to saying that they won't last much longer, so Hellfire advises Sam that he should stock up on supplies and hide. If anyone survives, they will find him. While she's still talking to him, a Gnaar sneaks up behind her and kills her off-screen, ceasing her communication with Sam.

Hellfire is seen piloting an MH-6 Little Bird as she escorts an Earth Defense Force convey on their way to meet with Father Mikhail in Rome. On their way, they are ambushed by Octanian Raiders and she is separated along with the others. She later appears to meet up with Father Mikhail, Jones, Kenny, Rodriguez, and Sam in a stolen city bus with Carter and extracts them out of Rome and back to base, where they meet up with Brand and Quinn. At the base, Hellfire is with the rest of the team as they discuss how to get into the Vatican Library without being hampered by Mental's forces. Carter suggests using the HAARP to cause Mount Vevusius to erupt and ground the Octanian Raider fleet.

Once the team agrees, they have Hellfire drive the rest of her squad place 8 beacons around the ruins of Pompeii to activate the satellite. Brand activates it and they succeed in making the volcano erupt, despite the loss of Jones. Unfortunately for them, the team get stuck due to a communications malfunction. The team, save Jones, make it back to the car and Hellfire takes them back to base.

With their mission in Italy complete, Hellfire takes the Alien Artifact Acquisition squad to Carcassonne in France to find the Holy Grail, which is believed to have been taken there. On the way to France, some Octanian raiders fire at the plane, damaging the engines and forcing Hellfire and her team to jump out of the plane and parachute down into the French countryside.

In Serious Sam 3, Hellfire wore a stained white tank-top, jeans a brown boots. In Serious Sam 4, she now has a younger look, with spiked short hair, a shirt or tank top with a camo pattern on it, a leather jacket, blue jeans and brown boots.

Little is known about their relationship, but Hellfire would get frustrated with Carter whenever he mentioned his conspiracy theories.

She and Sam were good friends, and they would sometimes tease or flirt with each other, as hinted by their dialogue in Serious Sam 3. According to Rodriguez, they had both had sex on a helicopter during the Battle of Beijing, to which to tried to cover up.

Hellfire was a highly skilled pilot, being proficient in flying aicraft such as helicopters or planes. She was cleared to operate almost every single EDF vehicle, and was equally capable in close and ranged combat. Like Sam, her signature weapon was the XM214-A Minigun. 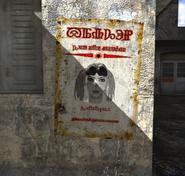 Hellfire in her Black Hawk.

Hellfire picking up Kenny and Sam in the car.