Admir Elezović
The Fiendian Reptiloid Demon is an enemy in the Serious Sam series. It is a ranged enemy that throws lava balls at its target from a distance.

The Fiendian Reptiloid Demon is a large, red demon-like creature that stands up to 20 ft tall. Despite its name, the Fiendian Reptiloid Demon is actually a different species compared to the Aludran Reptiloids. The Demon was originally a simple lizard-like organism from the planet Fiendia Prime, but was mutated by Mental over several generations to create the Demon. It is one of the few generally immobile enemies in the game, though in Serious Sam HD, Serious Sam Classics: Revolution, and Serious Sam VR it can move.

Demons are not as common as other enemies, usually only one to a few appear at a time but there are instances where several of them appear, like at the end of the Courtyards of Gilgamesh and in The Grand Cathedral. The first Demon encountered appears in Valley of the Jaguar after obtaining the first jaguar statue. A few Demons appear later in the level after getting the second jaguar statue.

Later on in the game, Demons are placed far away from the player to harass them while they are fighting off other enemies. They can usually be found in elevated places such as towers, roofs and pillars. They are much more common and numerous when playing on higher difficulties.

The Reptiloid Demon has the ability to form a miniature black hole through which it can summon floating balls of molten lava into existence. This projectile is extremely fast, and is much harder to avoid as it will fly past the player and attempt to circle back and hit them again. Unlike the projectiles tossed by the Common Aludran Reptiloid and much like the Highlander Aludran Reptiloid's fireballs, the fireballs thrown by the Demon cannot be destroyed in the classic version of the game except by a cannonball or a few laser beams. However, in the HD and VR versions, it can be destroyed using any weapon except for melee weapons, shotguns, or bullet-based weapons. If the ball does not hit the player at first, it will bounce around until it either hits the player, a wall at a non-low angle, or it explodes on its own after traveling around in the air, sometimes moving around in a corkscrew motion.

The Demon's secondary attack is hitting the player with its claws if they get too close. This attack is difficult to avoid and deals a lot of damage. 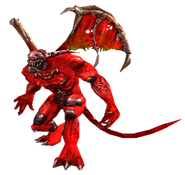 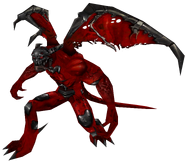 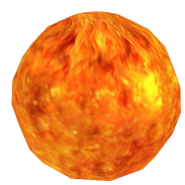 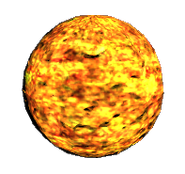