The Fattie Swallower is the second boss of Serious Sam's Bogus Detour.

The Fattie Swallower is a large Scrapjack with a huge appetite. He started to first work up his appetite in some fat camps and then began to compete in illegal weight contests to satisfy his gluttony. After a few "bad rulings" and a "mistakenly" eaten judge, he was thrown out.

When he started to work for Mental, his arms were amputated and replaced with huge ripper cannons in an attempt to stop him from eating so much. Unfortunately, this proved to be futile, as he began eating everything, from small cars to allied troops. However, he usually spits the latter out.

The Fattie has two attacks. His primary attack is firing large sawblades at the player. These blades function in the exact same manner as the blades fired by the Slicer; they will bounce around walls and other obstacles until they eventually disappear. These blades are very damaging if the player comes into contact with them. As the Fattie takes damage, he will begin launching projectiles of vomit into the air. These projectiles will either contain ammo, health, or enemies such as Gnaars or Kleers. 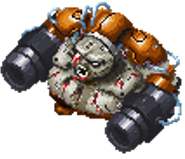 NETRICSA showing the Fattie.
Add a photo to this gallery

Retrieved from "https://serioussam.fandom.com/wiki/Fattie_Swallower?oldid=59989"
Community content is available under CC-BY-SA unless otherwise noted.