The Fatso Fighter is an attack aircraft that appears in Serious Sam 2.

The Fatso Fighter is an impressive ship designed by Mental's Toyoda factories. It has a unique design where the laser guns are recharged by the ship's engines, giving it unlimited ammo. It can also be equipped to be flown remotely.

The Fatso's only attack is to shoot lasers when it sees the target while flying, then fly back and do it again.

A variation of this enemy is spawned by the Mental Institution. In the first wave they will charge towards the player and blow up when they hit the ground. 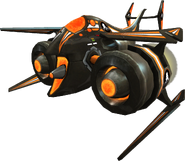 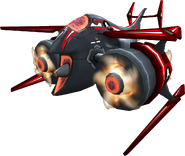 Beam fired by the fighter.