The Dragonman is an enemy cut from Serious Sam: The First Encounter.

The Dragonman is a green humanoid creature with bat-like wings. It was supposed to be similar to the Scythian Witch-Harpy, in that it flew and tossed projectiles. There were supposed to be three versions of the Dragonman: the soldier, sergeant, and monster. Each did the same amount of damage, but had increasing amounts of health.

The Dragonman appears to be have been based off of the Scythian Witch-Harpy's code, as the line “woman can't harm woman” (woman being the internal name for the Harpy) appears in the Dragonman's code. It appears with the Harpy in screenshots of an early version of Moon Mountains, showing that they were supposed to appear together. 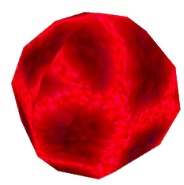 Wireframe Dragonman along with an alpha Arachnoid and XM214-A Minigun.

A Dragonman and a Harpy.
Add a photo to this gallery

Retrieved from "https://serioussam.fandom.com/wiki/Dragonman?oldid=50602"
Community content is available under CC-BY-SA unless otherwise noted.