The Cyborg is an enemy cut from Serious Sam: The First Encounter. They also appear in Serious Sam Classics: Revolution and can be put in maps by custom map designers.

The Cyborg is a technorganic humanoid similar in appearance to the T-800 Terminator. They had two attacks; firing a laser and throwing a bomb. The Cyborgs were able to either ride on a flying bike or walk on the ground, much like the Orc Commander.

Available screenshots show that the Cyborg was to appear during the Sky City chapter of the game.

The Cyborg could ride a special vehicle, called the "CyborgBike" in the game's files. This would allow them to fly, along with being able to fire lasers and launch bombs from the air. 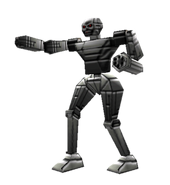 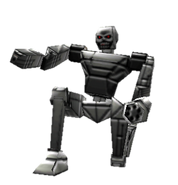 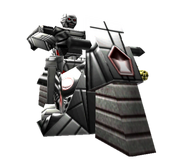 Serious Editor icon from Test 1.
Add a photo to this gallery

Retrieved from "https://serioussam.fandom.com/wiki/Cyborg?oldid=50585"
Community content is available under CC-BY-SA unless otherwise noted.