Cucurbito the Pumpkin is an enemy appearing multiple times in the Serious Sam series.

Cucurbito the Pumpkin is a genetically engineered humanoid who wears overalls, uses a chainsaw, and has a pumpkin for a head. He was created by Mental by combining elements his time-traveling agents found on 20th century Earth, including Smashing Pumpkins albums, a copy of the Burt Reynolds movie Deliverance and a copy of Lumberjack Digest. As Mental inserted the final, 1979th part into his creation, it sprang to life and even he faltered at the sight of it.

In Serious Sam: The Second Encounter, Cucurbitos are relatively common enemies, appearing from Sierra de Chiapas onwards. Most of them appear in close quarter areas, though there are a few times where they appear in open spaces. Tiny ones spawn in the secret pumpkin yard in The Grand Cathedral.

In Serious Sam: The Greek Encounter, Cucurbitos often appear with other tough enemies, such as Sirian Werebulls and Statues.

Cucurbitos and fairly common units in Mental's army, often serving as close-range assault and to get as close to the target as possible to deal damage with their chainsaws. However, as they have no ranged attacks, they can be easily dispatched with firearms from a safe distance unless they are encountered in large numbers.

When Cucurbitos do appear, they usually spawn with other enemies, such as Gnaars, Kleer Skeletons, Minor and/or Major Bio-mechanoids, and Zumb'uls.

The Cucurbito's primary (and only) weapon that they use in combat is their chainsaw. Upon spotting the target, they will charge towards them and repeadtely slash at them with their chainsaw. Their charge attack is similar to that of the Sirian Werebull. If the target dodges their attack, the Cucurbito will turn around and try again. In Serious Sam HD, Cucurbitos can sometimes rapidly slash the player, dealing the same amount of damage but in a rapid succession. This usually occurs if the player is close to them after their charge attack is finished.

In I Hate Running Backwards, Cucurbitos are much larger and more durable, having the highest health points out of any non-boss enemy in the game. They also behave differently than in The Second Encounter ; they will react the same way upon noticing their target just as they do in the previous installments, though when attacked, they will become enraged, raise their chainsaw and increase their speed to get to the target faster, which makes them even more dangerous than before. 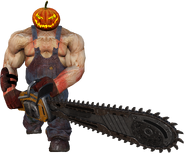 A Cucurbito in Serious Sam VR: The Second Encounter. 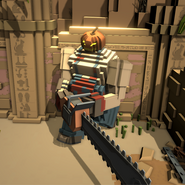 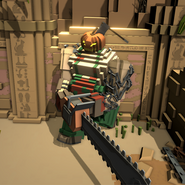 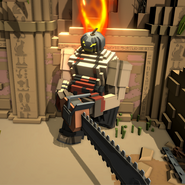