"Ah, a Reptiloid. I could use a new handbag!"
―Michelle Djabali[src]

The Common Aludran Reptiloid belongs to a species of four-handed reptilian creatures originating from the Aludran System, located in the constellation of Canis Major. During Mental's search for lifeforms that he could use in his army, he discovered the primitive race of the Reptiloids after their species was slowly dying off, and he offered them magical powers in exchange for them joining his army, to which they agreed.

In Serious Sam: The First Encounter, Reptiloids start out from the Valley of the Kings, where they are rather uncommon enemies, but in the following levels, more and more of them appear, until they become common, although they don't appear in The Great Pyramid on solo play. There are lots of Common Reptiloids in Serious Sam: The Second Encounter as well, from the first level to the final level. They are more mobile in The First Encounter, compared to The Second Encounter, where they are usually stationary. Tiny Reptiloids appear in Sacred Yards and the secret "yard of strange-looking heads" in The City of the Gods.

In Serious Sam 3: BFE, the Aludran Reptiloid only appears in Jewel of the Nile, where they are encountered on top of buildings or ledges, though sometimes they are mobile like they are in The First Encounter.

In Serious Sam VR: The Last Hope, the Reptiloid first appears in Court of Contemplation. Later on, they appear more common, often following the same spawning mechanics as they do in the previous games.

This time around, the Reptiloid is a lot more common than in the previous games, occuring slightly more frequently than in Serious Sam: The Second Encounter. The first Reptiloid appears in Four Horsemen of the Apocalypse, and then on its own or in small groups later on. Several of them may be encountered at once in the later stages of the game, like in From Earth With Love.

Reptiloids, when they appear, play a similar role to Arachnoids and often spawn far away, such as on top of pillars, columns, roofs, and so on, in order to 'snipe' the target from a distance and to distract them. In some of their appearances, they appear more frequently on the ground, where they serve as low to medium-range assault or support units.

Like other species of Reptiloids, the Common Reptiloid is skilled in casting the magical spells that Mental granted them. The Reptiloid is covered in tough scales that can prove useful in combat, as it grants them decent protection from bullet-firing weapons. Despite these advantages, though, they can still be easily dispatched from a distance with a powerful sniper rifle or weapons that fire explosive projectiles.

Behavior-wise, the Reptiloid does not charge towards the player like most enemies, instead preferring to keep its distance and often remaining stationary. Upon spotting the target, the Reptiloid will cast a magical green energy ball that will track the target. This homing ball will try to hit the target, and if it misses, it will turn around and try again. This projectile only lasts for a certain amount of time before it explodes on its own. The projectiles cast by the Reptiloid can be shot down by firearms, but will not be destroyed upon impacting with a surface or wall, unlike the lava balls tossed by the Fiendian Reptiloid Demon and Highlander Aludran Reptiloid in Serious Sam: The Second Encounter. The projectiles only last for a certain period of time before exploding in mid-air.

From Serious Sam HD onwards, should the target get too close to a Reptiloid, it willl deliver a powerful melee attack that consists of a punch or a stomp. Its melee attacks are far more powerful than its fireballs, so the player should avoid getting too close to one for that matter.

In Serious Sam VR: The Last Hope, the Reptiloid behaves the same as it does in the other games, but it rapidly fires a burst of projectiles in succession in a similar manner to the Highlander, making them more dangerous than before. The Reptiloid is also stronger than in other games, though the ability for dual-wielding weapons still makes it easy to kill it with strong weapons.

In Serious Sam 4, the Reptiloid is a lot more mobile than before, and will try to get closer to the player rather than keep its distance. If it has taken considerable damage, it will enter a 'berserk' state and charge towards the player, firing multiple fireballs at once. Like other enemies, the Reptiloid will become stunned briefly if it comes under rapid heavy fire. It will also take extra damage if it is shot in the head with any projectile-firing weapon. 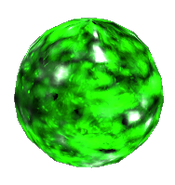 HD fireball tossed by the Reptiloid. 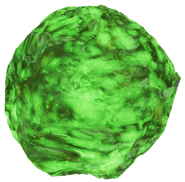 Fireball tossed by the Reptiloid.