Independent
Chux is a playable character in I Hate Running Backwards. He is one of the three characters unlocked by default.

Chux is a caucasian man with ginger hair and a long beard who wears black shades like Serious Sam. His name is based off Matija "Chux" Cukelj, one of the beta testers of the game a community moderator on the game's official Discord server. During his time playing on the game in its early stages, he always scored for first place on the leaderboards. The developers were impressed, and so created Chux to commemorate his support of the game.

Chux is famous for becoming the champion and being a record holder at the local arcade. Sometime later in his life, he joined a gang of bikers known as the 40 Ping Matchmakers. He was soon ambushed by some Beheaded Rocketeers that ended up destroying his bike. He then swore he would get revenge and later joined Sam and his pals in the fight against Mental.

Compared to the other playable characters, Chux has a very high damage output, but he drains weapon ammunition quickly and also has slow and sluggish movement - a drawback for having high damage stats.

Chux has no special abilities. 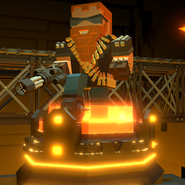