The Chimputee Battle Master is a huge gorilla with a large saw for one arm and a large, three barreled grenade launcher as another arm. It also has an eye patch that fires lasers at a target. Its lower legs have been replaced with a platform with jets on it, which allow it to fly around. For some reason, it is dressed somewhat like an Egyptian pharaoh, complete with a large hat and golden beetle on its suspenders. Because of the Battle Master's large size, it has a high amount of health.

The Chimputee Battle Master starts off a battle while using three attacks; lasers, banana grenades and a saw charge. The laser attack is exactly the same as the Minor Bio-mechanoid; it will fire a burst of lasers from one direction, usually low, to another direction, usually upwards.

The banana grenade attack is very similar to the regular Chimputees', as it fires a banana grenade that, when the Battle Master has taken some damage, it will start flying upwards and having a saw land on the ground. After it hits the ground, it will quickly fly forward in one direction until it hits a wall.

When the Battle Master has been killed, a crystal beacon will appear.

Laser fired by the Battle Master. 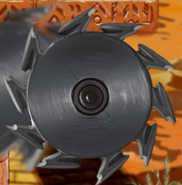 Saw tossed by the Battle Master.
Add a photo to this gallery

Retrieved from "https://serioussam.fandom.com/wiki/Chimputee_Battle_Master?oldid=47842"
Community content is available under CC-BY-SA unless otherwise noted.