The Chimputee is a chimpanzee that has had its legs replaced with jets, wearing a pair of shades and armed with a grenade launcher and an axe.

In Serious Sam: Double D: XXL, there are new variants of Chimputees that look similiar to gorillas. They are similiar to their regular variants, though they have more health.

The Chimputee's primary attack is to fire a banana grenade at a target. If the grenade is launched upwards, it will fly up for a bit, then dip down. If launched downwards, it will fly straight to the ground, bounce around for a second, then blow up. These grenades can be destroyed by gunfire. If the target is right next to the Chimputee, it will swing at the target with its axe. Like Beheaded Bombers, the Chimputee will explode soon after it is killed.

Grenade fired by the Chimputee. 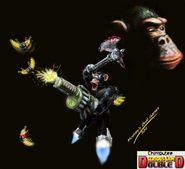 Retrieved from "https://serioussam.fandom.com/wiki/Chimputee?oldid=59968"
Community content is available under CC-BY-SA unless otherwise noted.