Admir Elezović
The Cerberus is an enemy that appears in Serious Sam 2.

Cerberus a brown three-headed dog creature that is based on the Ancient Greek beast of the same name. The Cerberus was created because of Mental's interest in Ancient Greek mythology and having a three-headed dog. After gaining some spare time, he created the Cerberus. After being created, the Cerberus began to have problems because each head had its own brain. Mental grew tired of their constant bickering and fighting and decided to remove their brains; instead programming a basic attack sequence into them.

Cerberus will charge the player and attempt to run into them. If it hits the player, it will toss the player to the side in addition to causing damage. 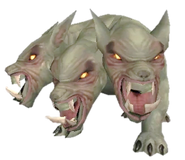 Beta model.
Add a photo to this gallery

Retrieved from "https://serioussam.fandom.com/wiki/Cerberus?oldid=60524"
Community content is available under CC-BY-SA unless otherwise noted.