Biopods are small enemies that are spawned by the Exotech Larva.

Biopods are small arthropod-like creatures with two long antennae protruding from their head. They have two bluish-green eyes and appear to have no limbs, so it its not known how they move around.

Biopods are created by the Exotech Larva during the boss fight as one of its attacks. The Biopods only attack is to charge into the player, which kills the Biopod on impact. 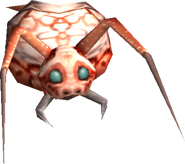 HD model.
Add a photo to this gallery

Retrieved from "https://serioussam.fandom.com/wiki/Biopod?oldid=52767"
Community content is available under CC-BY-SA unless otherwise noted.