"Would you consider attacking one at a time?"
―Sam Stone[src]

The Beheaded Rocketeer is an executed Sirian soldier that has been raised from the dead by the use of Mental's cyber-zombie technology. They, along with Beheaded Kamikazes, are the most commonly seen beheaded infantry in Mental's army, and often serve the role as disposable lightweight troops.

Having been decapitated, the remains of the Rocketeer's head have undergone cybernetic modifications. The main part of these cybernetics is the life control unit, an electronic device replacing the functionality of the removed upper part of the central nervous system. The device includes crude sensory modules and a vocal synthesizer. They carry their own head in one hand to receive audio and visual information.

Rocketeers are very common enemies in every game they appear in, usually on the first level and then in much larger groups later on. As the player progresses through the game, or if they are playing on high difficulty settings, Rocketeers become less common and are often replaced by stronger enemies such as Kleer Skeletons.

The Rocketeer is equipped with two weapons; an outdated, low-power handheld magic missile launcher that was used during the last days of the Sirian resistance, and a rotating buzz saw on their head. The Rocketeer's gun is cheap and suffers from low effiency and damage, for which they make up by possessing built-in techno-magical ammunition replenishers. Several varieties of this gun exist, some of which require to be manually reloaded after each shot.

As Rocketeers have been raised from the dead and are controlled by a life control unit, they have little to no brain functionality, and are only programmed to attack the enemy on sight. Like other beheaded infantry, their intelligence is mostly limited to blindly attack targets without any form of tactics or flanking manuevers. They are some of the weakest enemies in the Serious Sam games and can be easily be killed with any weapon in the player's arsenal. Like Beheaded Firecrackers, Rocketeers are immune to their own projectiles.

When the Rocketeer notices the target, he will fire a slow, non-tracking projectile at them from his gun. This is his only ranged attack. These projectiles travel in a straight line and take time to reach their target, making them easy to avoid. Depending on the game being played, there will either be a brief delay before he fires again or the Rocketeer will reload his gun.

On Serious difficulty in the Serious Sam 3: BFE component of Serious Sam Fusion, Rocketeers have a chance to fire homing projectiles, making them harder to avoid than the regular ones. These projectiles are similar in appearance to the magic missiles in Serious Sam HD. However, unlike normal projectiles, these can be destroyed with the player's weapons, much like the fireballs from Aludran Reptiloids.

In Serious Sam HD, Serious Sam: Double D, and Serious Sam VR, the Rocketeer has a melee attack, and he will perform a headbutting attack with his head-mounted buzz-saw to inflict damage. This attack is dangerous and deals more damage than his projectiles do.

In Serious Sam 4, standing too close to a Rocketeer will result in him kicking the player back or whacking them with his pistol. 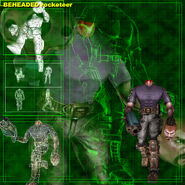 Concept art for the final model. 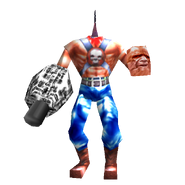 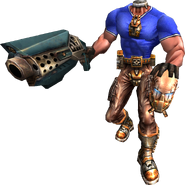 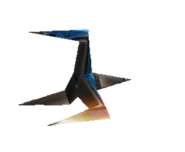 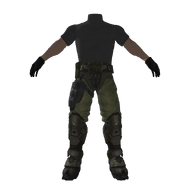 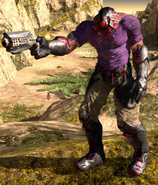 The Rocketeer in Serious Sam VR: The Last Hope. 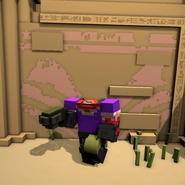 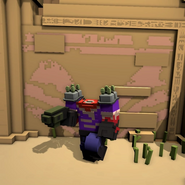 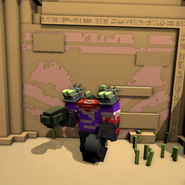