250
The Atlantean is an enemy that appears in Serious Sam: Next Encounter. They are fish-like enemies with plasma guns and two tentacles protruding from their backs.

The Atlanteans were originally the inhabitants of the lost city Atlantis, but when Mental invaded Atlantis, they were captured and brainwashed into being his loyal servants.

The Atlantean has two attacks; either fire a large stream of plasma balls or use their tentacles if the target is very close to them. The orbs do a little damage per shot, while the melee attack does more damage. 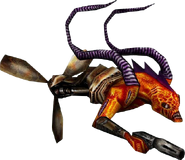 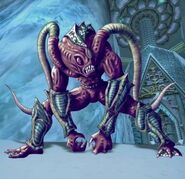 Retrieved from "https://serioussam.fandom.com/wiki/Atlantean?oldid=59917"
Community content is available under CC-BY-SA unless otherwise noted.