Arachnoids are a species of scorpion-like aliens encountered in the Serious Sam series.

Arachnoids are a primitive intelligent species that descended from some kind of arthropods on the planet Scorpius. It appears that Mental has tampered with their genes, as Arachnoid legends state that they originally had pincers on both hands and lived like wild animals. Then, a certain deity appeared and gave them a palm to their right hand so that they could hold weapons and wage a holy war. Surprisingly, this war also implies the destruction of any other intelligent race that their god points to. They are one of oldest species in Mental's Horde, having served him for several millenia.

In appearance, Arachnoids resemble giant scorpions, whose front part has a continuation in the form of a torso towering over it, with two arms and a head on a short neck. The left hand ends with a large claw, like ordinary scorpions, but the right one is equipped with a human-looking hand. The entire body is covered with large plates of a chitinous exoskeleton, which provides them with protection from small-arms fire and explosions to a certain extent.

All Arachnoid specimens that are encountered in battle are females, while males have never been found. Apparently, males live only on their home planet, and are a discriminated gender that are forbidden to fight. Absolutely nothing is known about the appearance and behavior of male Arachnoids. The females call themselves "Sih-Ark", which means "sacred warriors", and devote their lives to the service of the above deity, fighting for him to the last drop of blood.

The Arachnoid's favorite (and primary) weapon is a chaingun, which, as a rule, is equipped, thanks to Mental, with a techno-magical ammunition replenisher, giving the weapon unlimited ammunition. When an Arachnoid detects an enemy, she usually becomes so agitated that she cannot let go of the trigger. Arachnoids usually do not care about the fate of other soldiers in Mental's forces that are caught between them and the target. At close range, they use their deadly sting as a weapon.

An Arachnoid's age can be measured by the color of its exoskeleton. The hatchlings have greyish-brown or orange exoskeletons. In hatchlings, their necks have not fully developed, allowing a human to deliver a fatal blow to the hatchling by snapping their neck with enough force. The juveniles that are no more than ten years of age are brownish-yellow in color, and do not exceed ten feet in height and length, excluding the tail. As they mature, their exoskeleton turns red at around a hundred years of age. Usually adult Arachnoids grow to 20-25 feet. Elder Arachnoids are very rare and are over a thousand years old. Having survived many battles, they are cunning and resourceful. They have a blue exoskeleton with brown spots in the places of old scars that they can no longer heal and they are comparable in size to a small house.

Arachnoids are very intelligent creatures, and have an ancient culture spanning back thousands of years. They are, however, extremely hostile due to their violent culture in which struggles for dominance and power take place. Their culture values brute strength and mindless devotion above all else, resulting in relentless conflict. It is death from the claw of one's own kind in the struggle for primacy that is the most common cause of death in their society. When Mental found the Arachnoid's planet, he supported a faction of religious fanatics. He helped them destroy the High Council of Scorpius and ruin thousands of years of culture.

Arachnoids are capable of speech, and can speak in their native language and even English. One Arachnoid, Charlie, who served as an informant for the French Resistance, was able to form complete sentences in English, despite it not being her native tongue. Arachnoids were also given names just like humans, but their names were long and hard to pronounce, so they were often shortened for simplicity's sake.

Arachnoids are covered with a tough exoskeleton that allows them to take considerate gunfire or explosives before dying. The adults possess a fully-developed scarlet exoskeleton which is further augmented by additional armor, making them much tougher than younger Arachnoid warriors. Arachnoids also have a deadly sting that they will use against the target should they get too close to the Arachnoid.

Arachnoids are incredibly long-lived creatures. Their lifespan is unlimited, as they have a standard ectodermal metabolism, and can live as long as there is enough food, or until someone kills it. 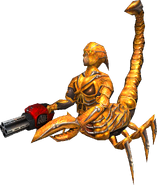 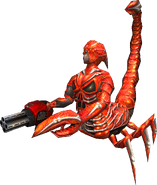 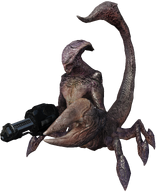 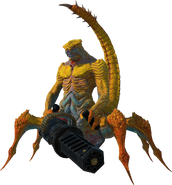 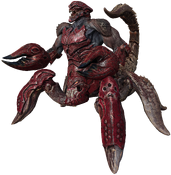 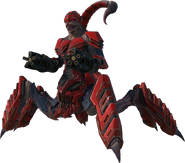