The Aludran Reptiloids are a reoccuring species of aliens encountered throughout the Serious Sam series.

Aludran Reptiloids are a race of large, hexapodal reptilians from the Aludran System of the Canis Major constellation. They evolved from a strange branch of reptiles which has resulted in them having four arms. Their evolutionary origins have also provided them with tough scales, which provides them a moderate amount of protection in combat situations.

Their skin color varies on the type of Reptiloid; the common species has greenish skin, male Highlanders have brownish-orange skin, and the females have greyish skin.

On their home planet, many species or subspecies of Reptiloids are known to exist, such as the Common Aludran Reptiloid, which is by the far the most common variant encountered. The common variety inhabits plains, while the larger species, the Highlander Aludran Reptiloids, are found in more mountaineous areas. The female Highlanders, known as the Highlander's Bride, is the largest known Reptiloid, and is far more aggressve than the males due to their all year-round PMS.

The Aludran Reptiloids were once a highly intelligent and sentient race that had a powerful civilzation. However, this all changed after the sun in their system began to expand and die, so the Aludran ruling class forsook scientific rationalism and embraced the heliolatrous beliefs of their forefathers. After that, only a decadent, inbred population remained, living in squator and worshipping the red supergiant scorching their world.

When Mental discovered the homeworld of the Reptiloids, he offered them the chance to join in his army in exchange for spell-casting powers, which they gladly accepted.

It is not if the Aludran Reptiloids possesed superior technology, as little is known about their civilization before it collapsed. Whatever technology remained was long forgotten afterwards.

All species of Aludran Reptiloids have the ability to summon magic fireballs. This ability was given to them by Mental in exchange for joining his army. Their projectiles have homing abilities, but they can be shot down mid-air by gunfire. They will launch these projectiles at a target from medium to far range, though if the target gets too close to them, the Reptiloid will whack them with one of their arms or deliver a powerful kick or stomp. Highlanders summon lava balls which can only be destroyed with explosives or cannonballs and travel at a much higher speed at their target.

A larger version of the Common Aludran Reptiloid, Tetrachoke the Wizard, has telekinetic powers, which enables him to use objects within the environment around him against his target. He can also cast multiple green fireballs in succession, both homing and non-homing ones.

The common variant of Reptiloid. 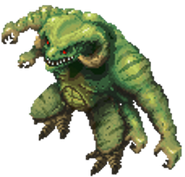